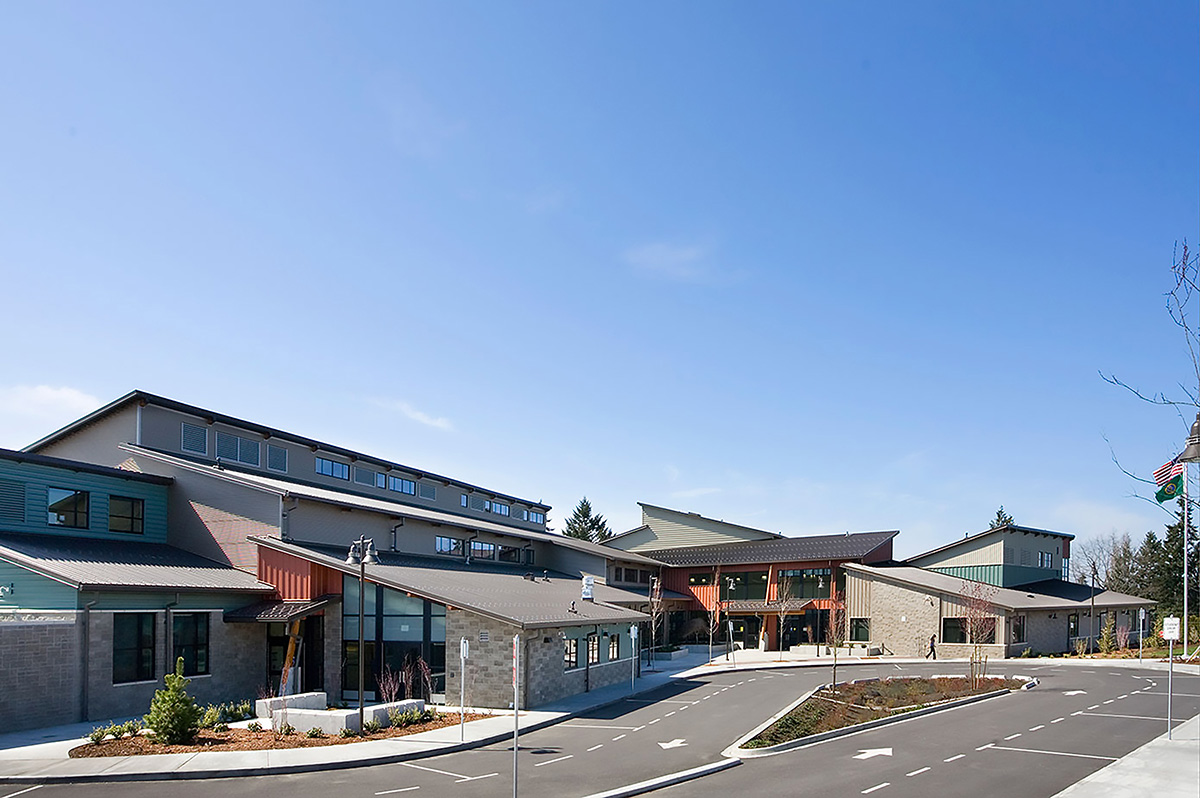 Highline Public Schools serve a half-dozen communities south of Seattle, including Burien, where Shorewood Elementary educates approximately 550 pre-kindergarteners through sixth-grade students. The school’s “cafetorium” is actually two spaces: a cafeteria/auditorium and a gymnasium, separated by an air wall. The cafetorium’s sound system, which is separate from the school intercom, was installed in 2010, and the power amplifiers and speakers worked well. However, the DSP that was initially installed proved too difficult to use. In search of a more user-friendly solution, the school contacted Dave May of Impulse Audio in Seattle.

May’s firm wasn’t involved in the original install, but he understood the issues. His solution: Retain the amplifiers and speakers but replace the problematic DSP with a Symetrix Solus NX 8×8, controlled with a pair of Symetrix ARC-3 wall panels. “An elementary school typically wants a mixer on a virtual tablet and replicated on a wall control in case something happens to the tablet,” May asserts. “They have 20 minutes to get things set up, and they just want it to work, so we have to put the ‘smarts’ into the DSP and make it as easy to use as possible. The old DSP’s remote control was so cryptic that nobody could figure it out, so they rarely used the system.”

In contrast, declares May, “the new Symetrix ARC remote controls are so easy to use, I have to do very little training, and that’s huge. I train people with these new remotes by letting them train me. I say something like, ‘please look at this remote and adjust the volume of microphone 2.’ They start pushing buttons, and they figure it out right away. I don’t have to explain.”

The gym side of the cafetorium employs one microphone input for the gym coach’s wireless headset microphone and one music input. The cafeteria/auditorium side boasts a wireless mic input, four microphone inputs on a small stage, and an auxiliary combo input on the back wall to employ an MP3 player or another audio source. “We gave them a portable analogue mixer in a case, and they can plug it in the rear of the room and run a complete show from a tactile mixer if they want,” details May. All sound sources go directly to analogue inputs on the Solus NX, and the DSP sends analogue out to the power amps and speakers.

The school’s Solus NX manages two audio systems, one for the gym and the other for the cafeteria/auditorium, with an ARC-3 wall panel in each space. Combining the two spaces is as simple as opening the air wall and touching a button on either wall panel. The system also can be controlled from a Windows tablet, thanks to Symetrix’ SymVue network-based runtime application for Windows PCs, touchscreen-enabled PCs, and tablets. SymVue displays control screens for Symetrix Radius, Edge, Prism, and Solus NX DSPs authored in and exported from, Symetrix Composer programming software.

May chose the Solus NX because it was a cost-effective solution that fully met the school’s needs. “On a larger project, where they need Dante, expandability, and lots of inputs, I’d put in a Radius or a Prism,” May explains. “Both of those pieces are fantastic. I put in Prism more than anything else; that’s our bread-and-butter. But the school never would have used all of that, they won’t need to expand the system, and the Solus NX costs less and works flawlessly.”

Symetrix’ Composer DSP-programming software is another reason May chose Symetrix DSPs. “Symetrix has become my absolute go-to because of its power and simplicity,” he confirms. “Composer is all drag-and-drop. It’s so much more straightforward and elegant than any of the other major brands. I installed a new DSP at a hotel recently, and I had the whole thing programmed in three hours. Designing the Shorewood Elementary system probably took us an hour and a half.”

In addition to the advantages Symetrix DSPs provide, May appreciates the way the company does business. “Symetrix’ tech support folks have always been able to answer my questions perfectly and quickly. I can’t even tell you what a great thing that is,” he praises. “The other day I called a vendor and was on the phone for 20 minutes waiting for them to answer, then didn’t get the right information.That’s awful. At Symetrix, they answer the phone immediately.”

For the customer, of course, it’s about results and cost-effectiveness. “Shorewood Elementary went from having a clunky mixing system that they couldn’t use to a cost-effective DSP with a full automixer, compression, and EQ on every channel. They don’t know that it’s there, but it is. We installed the Solus NX a month before school was out, and there were many events at the end of the year, yet they didn’t need any tech support. I trained one person, and everybody else just figured it out. They configured it for multicultural events, a talent show, a choral concert, a band concert and I didn’t have to do anything. They’re delighted, and so am I.”

This article is originally from www.pro-systems.co.za

Please contact us for more information on Symetrix products