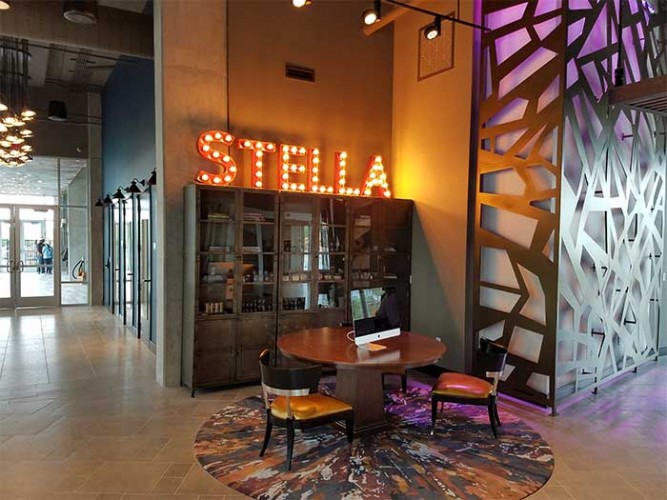 The new Stella Hotel, located conveniently close to the Easterwood Airport, accommodates visitors who want to enjoy their stay in comfort and attend events in well-appointed spaces. To ensure quality sound in the ballroom and meeting rooms, the hotel called on systems integrators Hairel Enterprises of Conroe, which specified a system based on a Symetrix Radius 12×8 EX DSP.

“The Stella Hotel is one of the nicest hotels I’ve worked on in years,” relates Hairel Enterprises vice president Rob Slaughter. “It features 20,000 square feet of meeting and event space, including the three-section Aurora Ballroom and four outboard meeting spaces. The background music system is extensive and uses a lot more 70- volt speaker zones than you would expect. Music is routed to zones in various combinations, and zones often are combined, depending on what’s going on. Symetrix DSPs are the first processor we reach for, especially for hotels, and the Radius 12×8 EX easily handled everything for the Stella Hotel project.”

Slaughter cites multiple reasons for choosing Symetrix, starting with reliability. “We’ve used a lot of Symetrix processors, going back many years,” Slaughter recounts. “Sure, once in awhile a unit will fail due to a lightning strike or a Coca-Cola spill, but Symetrix DSPs are among the most stable products across the board-not just in DSP land but in product land in general. Their mean time between failures, or MTBF, is very low.”

Another factor is ease of use. “You don’t have to be a rocket scientist to program it,” insists Slaughter. “You can do a lot with Symetrix’ Composer software, and it doesn’t fight you. The GUI is very friendly. Some of our people regularly go to Symetrix training classes, too, so we know how to get the results we need. Also, Symetrix processors integrate easily with the Crestron control systems we used in the Stella Hotel.”

“The Radius’ audio quality, compatibility, reliability, and ease of programming were major factors,” Slaughter recounts, “but there’s another reason we chose Symetrix: We have a great relationship with the Symetrix rep. We buy based on relationships because we know we’ll get great support. I’ve had times I needed a DSP the same morning, and the Symetrix rep found one for me.” Of course, for the customer, it’s about reliable, high-quality performance. “We have the utmost confidence in the Radius DSP in the Stella Hotel system,” concludes Slaughter. “Symetrix processors just plain work.”

This article is originally from www.pro-systems.co.za

Please contact us for more information on Symetrix products.