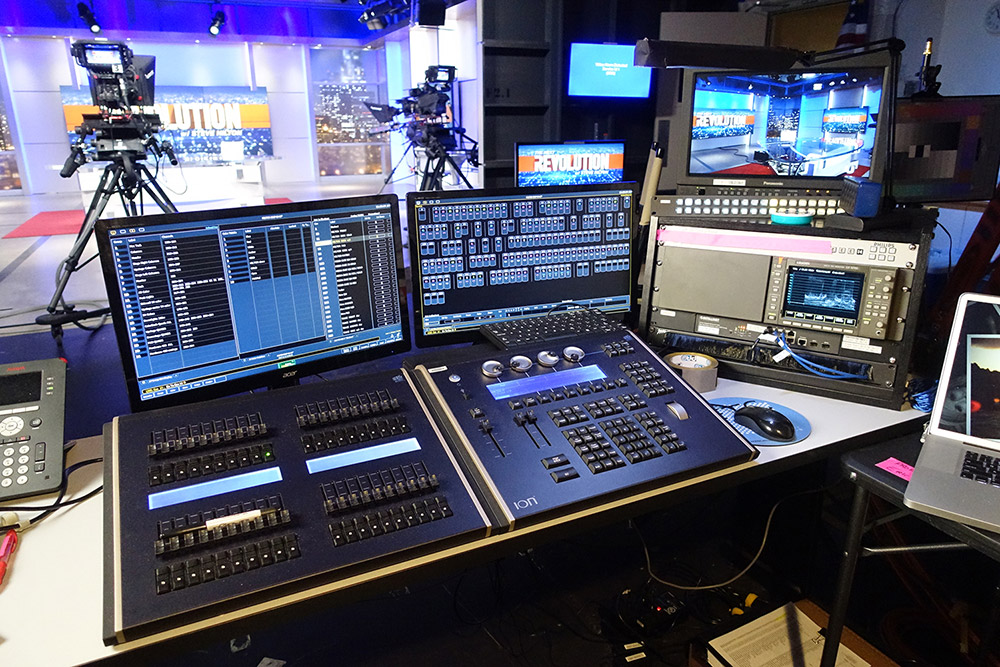 The Los Angeles Bureau of the Fox News Channel has seen its share of rising and falling news personalities but a constant star is ETC.

The small studio in Culver City serves as the Left Coast broadcast centre for several prominent US TV presenters, including Laura Ingraham, Sean Hannity and Geraldo Rivera. In the late 80s and early 90s it was the home of the late-night talk show, The Pat Sajak Show. In 2017, the stage underwent a complete overhaul – out with the wood-panelled look in favour of a Plexiglas and stainless steel design with a curtain track backdrop that can switch from night to day faster than you can say “breaking news.” With its unusually high ceiling and excellent acoustics, the stage is now home to The Next Revolution with Steve Hilton Sunday night broadcast.

The revamped set design came with a much-needed new lighting package provided by 4Wall Lighting’s Los Angeles office. Lighting Director Eric Reinig and his counterparts in New York specified a mostly ETC LED system. “It only made sense to go LED, for the flexibility and the reduction of heat onstage and the running costs,” says Reinig. “The old rig of standard 1K and 2K fixtures and old Strand gear was well past its prime.”

The new rig features 32 ETC Source Four LED Series 2 fixtures with Lustr arrays and a range of lenses (19, 26 and 36 degrees), serving as the new key lights for the talent and colour washes on the scenic panels. A few classic Source Fours are used as specials, powered by an ETC 24-channel Sensor3 dimmer pack. “Even though we have to colour correct them to 4300 degrees, the conventional fixtures give me a softer look. But you can’t beat the Lustrs for flat field and coolness to the touch.”

Describing the change in lighting control, Reinig jokes: “We went from a ‘baby starter’ two-scene, preset to an ETC Ion 1500 with a 2×20 Universal Fader Wing.” The learning curve more than paid off in the ability to set up pre-programmed looks for Fox shows and any incoming rentals. The nearby Fox Sports One/Fox Deportes studio, where Reinig is also an LD, uses an Ion console.

Reinig’s career path was equally transformative. While he worked in construction, he maintained an interest in photography and operated a DJ company with several DJs and mobile systems for private parties and nightclubs. When he was injured on a construction job, he went back to school – first to Moorpark College, followed by a degree in cinematography at California State University, Northridge. “I was lucky to have a friend at Fox who let me play with equipment and learn the gear – I also was also an apprentice with cinematographer Bill Bennett (a member of ASC) and fell in love with lighting.”

Today Reinig uses studio down time to experiment with new lighting looks and get deeper into the workings of the Ion. Pointing out the extremely long top hats on the Lustr fixtures around the news desk, he explains, “Our host Steve Hilton is bald and we use this technique to reduce hot spots on his head. I am guessing other shows have faced the same challenges in controlling multiple points of light off of the top of their host – it’s a great trick.”

Looking ahead, Reinig already sees a need for 12 more Lustr fixtures and 12 spares, as the studio may expand into more of an entertainment stage. “Every time I go to LDI, my mind starts racing with the possibility of new gear. It’s an exciting time in lighting.”

Please contact us or your nearest ETC dealer for more information on ETC products.