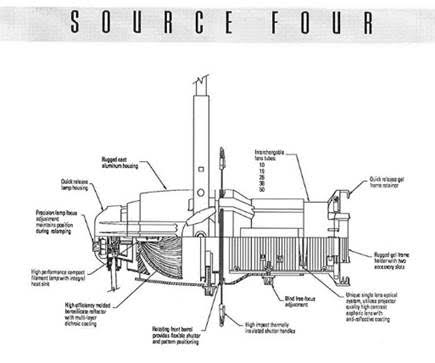 This November marks the 25th anniversary of the birth of the Source Four® fixture at ETC. Between now and this year’s LDI tradeshow, we’re taking a look back at this product that has become such a major part of ETC’s story, the fixture that has made a long-lasting impact on our industry, and the product that has inspired many additional ETC fixtures.

When asked what he remembers about the first time he saw the Source Four, ETC CEO Fred Foster says “When I first saw the Source Four it was just a HPL lamp, glass reflector, and a lens on an optical rail in Dave Cunningham’s lab. But it was 40% brighter than a 1000W FEL and used only 575W of power. I was awestruck. It was even more fun to watch the looks on the faces of the LDI attendees when we launched the product a year later.”

Ellen White, outreach and training specialist at ETC, was working in ETC’s booth in 1992 when Source Four was first revealed. “We launched three products at that tradeshow and we really thought the talk was going to focus on the Sensor dimmers and the Obsession console. But Source Four started a small buzz that morning and became the topic of conversation at many dinners that evening.”

Since launching at LDI in 1992, ETC has shipped nearly 3.8 million Source Four fixtures. That gives us plenty of reasons to celebrate this milestone.

Between now and 1 October, please submit photos through this online form in exchange for a limited edition Source Four 25th Anniversary t-shirt (while supplies last) and the chance to win one of ten Source Four Mini LEDs.

The last 25 years with Source Four have been an inspiration. Here’s to the next 25!