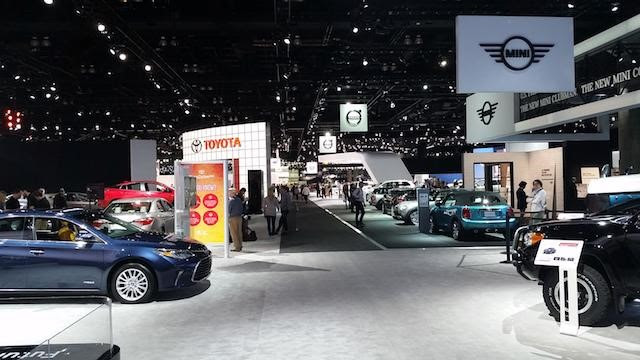 Although best known for his work as a front-of-house and monitor engineer for such stars as Queen Latifah, Natalie Cole, and Roberta Flack, Rob Treloar does much more than mix shows. His company, Proscan Media, offers services ranging from live and studio engineering to production consultation, artist development, and web solutions. When not on tour, he provides audio services for trade shows, working for Ann Arbor, Michigan, technical services experts TLS Productions. Toyota is a TLS client, so Treloar often designs and installs multi-zone audio systems for car shows. The Attero Tech® unD32 32-channel Dante™ breakout box is at the core of these systems, hidden high above the sound and fury of the show.

“The booths at these shows are huge and spread out,” Treloar begins. “TLS Productions is primarily a lighting company, and they set up gigantic lighting systems with 200- to 300-foot sections of truss. At car shows, the companies have their various models on turntables. I set up 15 to 20 separate audio zones for these different locations on the show floor, with two to four loudspeakers per zone. I use high-end loudspeakers with tight pattern control because these are open areas, and we don’t want overlap between zones. In each zone, the car company has presenters, and we might have a dozen wireless microphones running. Toyota also has a stage with a sort of game show called Toyota Live that’s going on every hour, as well as celebrity appearances, and sometimes a DJ plays. It’s a challenging environment.”

In the past, building these car-show audio systems required running an analog snake up into the truss, branching it out over a 350 x 250-foot or larger expanse of five or six trusses, and then doing the cable drops. “It’s a lot of analog cable, so you run into ground loops, and maybe some of the connections are bad because it’s an old snake, that sort of thing,” Treloar asserts. “And you only get one chance to do the setup right. If you have to go back, you need to bring in a union guy with a lift, which costs a lot. It’s a logistical nightmare.”

Fortunately, Treloar had the knowledge and experience to come up with a better solution. “Because of my other projects, I understand the Dante transmission protocol,” he explains. “I started looking for a way to use Dante and run lightweight CAT5 cable up into the truss instead of big analog snakes. Then I discovered the Attero Tech unD32 Dante breakout box, which gives me 32 outputs over one CAT5 cable. It was like finding the Holy Grail!”

You often find the Attero Tech unD32 in permanent installations, such as hotels and houses of worship, but Treloar wanted to use it in a temporary rig for live sound. “I adapted the unD32 for live sound by adding 32 XLR connectors to the unit,” he relates. “I put it in a rack, and I mount that up in the truss. So I’m using the unD32 as a Dante-to-analog breakout box up on the truss, and then I branch out. It makes my life so much easier when we’re doing setup.” Treloar uses Dante-enabled wireless mics and consoles whenever possible, with the consoles handling the DSP, so the system is Dante all the way through. 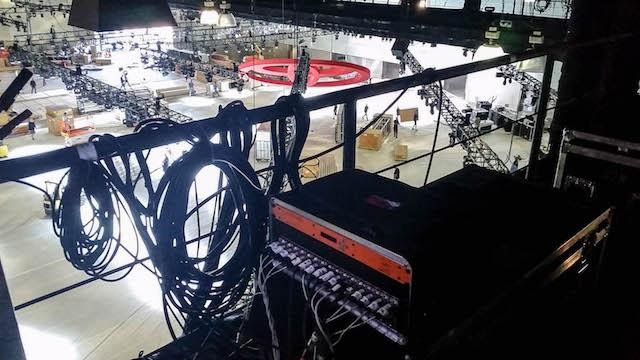 Last year, Treloar supplied the audio system for a car show at the Los Angeles Convention Center. As with most such shows, the audio team was just Treloar and one other person, and he needed to get the installation done quickly to avoid holding up the much larger lighting crews. “Everything runs in catwalks at that convention center, and it takes 15 minutes just to get up there,” recalls Treloar. “Doing cable runs up there is crazy. But with the Attero Tech unD32, I was able to run just one CAT5 cable up to the catwalks, place the unD32 in a central location, and then branch out to do drops down to the truss. I had all my outputs in one place. It was fantastic!”

In addition to logistical and technical advantages, Treloar has found the Attero Tech solution extremely cost effective. “When I saw a single-rackspace Dante breakout device that could provide 32 outputs, my jaw dropped,” he admits. “In order for me to get that anywhere else, I’d have to spend thousands of dollars more, and my client probably wouldn’t agree to it. With the unD32, I have exactly what I need for a very affordable price. And Attero Tech is a cool company with very good people. They really have made my life much easier.”

Please contact us for more information on Attero Tech products.